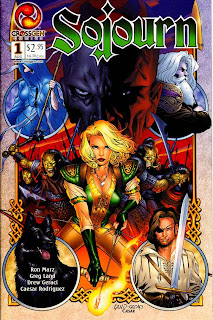 One occurrence that seems to have become a ritual of mine is to every so often hit up a local pizzeria.  Before going though, I hit up a used book store, whichever one happens to be closest, and peruse the used trades and single issues for something that sounds interesting.  I've found some great things over the years:  Grant Morrison's first arc on JLA (still a favorite of mine), a twenty issue run from Chuck Dixon's Robin and one rare afternoon I even found a used copy of Eastman & Laird's TMNT (the color edition).  This time out was a good one as I snagged the first trade of Sojourn, the best selling Crossgen title and a book that I generally have heard good things about.


First off, the Fantasy genre is a hard thing to make work well in comics.  There have been many over the years, but it seemed that if you didn't have the names Conan or Red Sojna in the title, people seemed to be a tad disinterested.  Sojourn certainly is Fantasy.  You have your Orcs and your Trolls and the whole sword and sorcery angle as well.  Ron Marz, a writer that I know best for his story, Emerald Twilight, that happened to turn everyone's favorite Green Lantern Hal Jordan into a mass murderer, does a good job of selling said genre and capturing the reader's attention from page one. 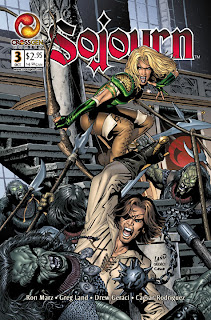 I love the fact that he opens the story with a focus on his villain, Mordath.  It catches you off guard and allows you to see the man behind the curtain, prideful and on the ropes as his last vestige of a castle is being overrun by the people that he had conquered.  It's a great sequence, one that not only defines him as a villain, but puts into motion the man that apparently has the power to take him down, Ayden (who looks like an aged King Arthur).

After that, it skips several hundred years to a time when Mordath has returned from the grave and has finally finished what he set out to do; conquer all of the Five Kingdoms.  It's a harsh way to begin a story.  Certainly dark, which fits Marz's style.  What's also unusual is that the entirety of these issues (and from what I gather, most of the series) is narrated by one of the secondary characters.  It reminds me a lot of the original cut of Blade Runner, and while the mechanic could have been a big misstep, it works.  Things can be explained with them while at the same time action is being drummed out.  It's through these narrations that our main hero, Arwyn is introduced.  She's a tragic character, a woman who was content with her life until in the matter of seconds, it was all torn away.  Again, it's dark but I appreciated what Marz did with the backstory and the motivation that she is given to kill Mordath.  The deaths of her husband and little girl are not seen.  They are eluded to, even glimpsed slightly, but he made use of a classic horror movie tool and allowed the reader's mind to do the dirty work for him.

But all is not dark in this world.  Marz finds an uneven balance in that respect with the character of Gareth (the narrator), who is essentially a one eyed Mad Martigan.  He's the plucky side-kick and adds the moments of levity that are needed in such a story as this one.  Arwyn meets him after she is captured and chained in a dungeon, and it's with his help, and that of a third character, that they escape.  The jokes feel a little stale, but it wasn't a huge deal breaker. 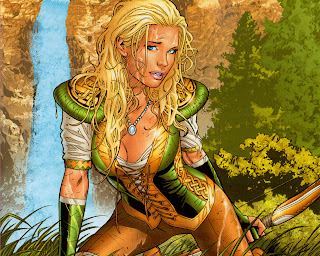 Enough about the story though, let's take a gander at the artwork.  Greg Land...where to even begin?  I first encountered his artwork during his run on Birds of Prey.  His line work in that book was actually quite good and I remember being very impressed with his layouts.  There was a bit of photo reference that could be seen, but there was a much more organic and less static feel to it than the projects he has been working on nowadays.   With Sojourn, we see him teeter back and forth along that line, spilling every so often into the super photo referencing (see picture above) while other times having a very traditional line.  He has made both of those styles work for him, which I find interesting.

I personally am not a huge fan of the photo reference style of art.  I think it can be used well, especially by people like John Cassaday.  Most of the time however it feels like that style is the needle skipping on a smooth record, it takes the reader out of the story.  But like I said, in this book he teeters back and forth.  The action, scenes that have Arwyn and Gareth breaking out of the citadel or when Arwyn tries to make good on her promise to kill Mordath, are fluid and expressive and exciting.  The backgrounds are lush and immersive too.  Truthfully, I could call a lot of what's found in this first trade some of Land's best work to date.  He sells the swashbuckling and arrow firing world quite well.

In the end, Marz's take on the fantasy genre is solid.  He crafted memorable characters, be it main ones or supporting characters like Kreeg, Arwyn's dog.  They are likable and relate able, which sometimes is what truly counts.  I could easily gripe about falling a little to close to the usual tropes, but having the book fall in line with the rest of the Sigil universe that Crossgen was building was the really unusual element.  But from what I understand, Sojourn was an abnormality where the main character wasn't really involved with the Sigil tie-in, it was the villain Mordath.  The concept of Sojourn is revenge.  Simple and sweet and something that I  can get behind.  I will have to keep my eyes peeled for the other trades, as I am curious as to what happens.  Maybe with Marvel's revival of the Crossgen imprint we'll get some trades back in print.
Posted by Rogue Displays at 3:01 AM

Email ThisBlogThis!Share to TwitterShare to FacebookShare to Pinterest
Labels: Blast from the Past, Nick Budd, Reviews

Nick's Top 5 Comics of the Moment

Places of Interest on the Web